HOW TO PLAY BLACKJACK 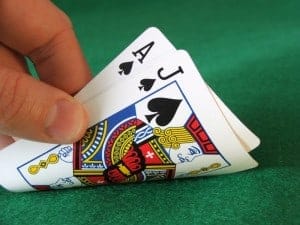 Blackjack is played with one or more standard 52-card decks, with each denomination assigned a point value. The cards 2 through 10 are worth their face value. Kings, queens, and jacks are worth 10, and we may use aces as either 1 or 11. The player’s object is to draw cards totaling closer to 21, without going over, than the dealer’s cards.

The best total of all is a two-card 21, or a blackjack. Blackjack pays 3-2–that is, a two-card 21 on a $5 bet will win $7.50 instead of the usual $5 even-money payoff on other winning hands. However, if the dealer also has a two-card 21, the hand pushes or ties, and you get your original bet back. But if the dealer goes on to draw 21 in three or more cards, your blackjack is still a winner with its 3-2 payoff.

The game is usually played at an arc-shaped table with places for up to seven players on the outside and the dealer on the inside. At one corner of the table is a rectangular placard that tells the minimum and maximum bets at that table and gives variations in standard rules. For example, the sign might say, “BLACKJACK. $5 to $2,000. Split any pair three times. Double on any two cards.” That means the minimum bet at this table is $5, and the maximum is $2,000. We may split pairs according to the rules described below, and if more matching cards are dealt, we may split the pairs up to three times for a total of four hands. The player may double the original bet (double down) and receive just one more card on any two-card total.

Most games today use four, six, or eight decks. After being shuffled, the cards are placed in a receptacle called a shoe, from which the dealer can slide out one card at a time. Single- or double-deck games, most common in Nevada and popular in Mississippi and some other markets, maybe dealt from the dealer’s hand.

Play begins when you place a bet by stacking a chip or chips in the betting square on the table directly in front of you. After all, bets have been placed, each player and the dealer are given two cards. In a shoe game, all player cards are dealt face-up, and the players are not permitted to touch their cards. In a single- or double-deck game dealt from the hand, cards are dealt facedown, and players may pick them up with one hand. Either way, one of the dealer’s cards is turned faceup so the players can see it.

Once the cards have been dealt, players decide in turn how to play out their hands. After all, players have finished, the dealer plays according to set rules: The dealer must draw more cards to any total of 16 or less and must stand on 17 or more. In some casinos, the dealer will also draw to “soft” 17 — a 17 including an ace or aces that could also be counted as a 7. The most common soft 17 is ace-6, but several other totals, such as ace-3-3 or ace-4-2, on up to ace-ace-ace-ace-ace-ace-ace in a multiple deck game, are soft 17s.

Hit: If you hit, you take another card or cards in hopes of getting closer to 21. If the player’s total exceeds 21 after hitting, the player is said to “bust” and loses the bet. The player signals a hit by pointing to his cards or scratching or waving toward himself in shoe games. In facedown games, the player signals a hit by scratching the table with the cards. Verbal calls to hit are not accepted — signals are used to benefit the security cameras above the table, so a taped record is on hand to settle any potential disputes.

Stand: If you stand, you elect to draw no more cards in hopes that the current total will beat the dealer. Signal a stand by holding a flattened palm over your cards in a faceup game or by sliding your cards under your bet in a facedown game.

Double down: You may elect to double your original bet and receive only one more card regardless of its denomination. Some casinos restrict doubling down to hands in which your first two cards total 10 or 11. Others allow you to double on any two cards. Double down by taking a chip or chips equal to the amount of your original bet and placing them next to your bet. In a facedown game, at this point, you also need to turn your initial two cards faceup.

Split: If your first two cards are of the same denomination, you may elect to make a second bet equal to your first and split the pair, using each card as the first card in a different hand. For example, if you are dealt two 8s, you may slide a second bet equal to the first to your betting box. The dealer will separate the 8s, then put a second card on the first 8. You play that hand out in typical fashion until you either stand or bust; then the dealer sets a second card on the second 8, and you play that handout.

Many dealers will advise players to take insurance if the player has a blackjack. We can do this by simply calling out, “Even money” — because if the dealer does have blackjack, the player gets a payoff equal to the player’s bet instead of the 3-2 generally paid on blackjack.

As it happens, dealers who suggest this play are giving bad advice. Insurance would be an even bet if the dealer showing an ace completed a blackjack one-third (33.3 percent) of the time. But only 30.8 percent of cards have 10-values. Taking insurance is a foul percentage play, no matter what the player total unless the player is a card counter who knows that an enormous concentration of 10-value cards remains to be played.

Not all blackjack games are created equal. Some variations in the rules are suitable for the player, and some are bad. The shifts in the house edge may look small, but they make large differences in a game in which the total house edge is less than 1 percent against a primary strategy player. Here are some common variations and their effect on the house advantage:

Double downs after splitting pairs permitted: An excellent rule for the player. It cuts the house advantage by .13 percent. In areas where several casinos are within a reasonable distance, the player should choose games that are doubling after splits are allowed.

Resplitting of aces permitted: At most casinos, the player who splits aces receives only one more card on each ace. But if the player receives another ace, some casinos allow the resulting pair to be resplit. This option cuts the house edge by .03 percent. It is rare to find a game that goes even further by allowing the player to draw more than one card to a split ace, an option that cuts the house edge by .14 percent.

Late surrender: Found more often than early surrender, but still not commonplace, late surrender allows the player to give up half the bet rather than playing the hand after the dealer checks for blackjack. This decreases the house edge by .07 percent in a multiple-deck game, .02 percent in a single-deck game.

Double-downs limited to hard 11 and hard 10: Some casinos do not allow the player to double on totals of less than 10 or soft hands. The net is a .28-percent increase in the house edge.

Dealer hits soft 17: If instead of standing on all 17s, the dealer hits hands including an ace or aces totaled as either 7 or 17, the house edge is increased by .2 percent.

Blackjack pays 6-5: Common on single-deck games on the Las Vegas Strip, this game is a bankroll breaker for players. For example, a two-card 21 pays only $6 for a $5 bet instead of the usual $7.50, which adds 1.4 percent edge to the house–more than the typical house edge against the basic strategy of seasoned players in nearly all games with the standard 3-2 return.

Get all the latest Betting and Sport News updates on your social media outlets. Please find us on Facebook.